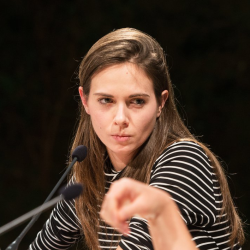 Google’s trends data suggest Russians might have lost interest in their current leader.

Just before its demise, in the final stages of a long lifecycle, a star turns into a red giant. The red colour is caused by an influx of energy generated by the star in an attempt to resist the force of gravity which will eventually crush it. The process makes the star appear bigger and shine brighter than ever, but the end of its life is near. After four presidential tenures and one premiership, might Vladimir Putin have entered the red giant phase of his political career? Online searches would suggest so.

In the eyes of the West, the duel between Mr Putin and Russian opposition leader Alexei Navalny has been tilting in the latter’s favour of late. Mr Navalny’s admirable reserves of courage, determination and trust in democratic values have earned him hero status around the world and created hope that he can challenge Mr Putin’s hold on power.

But if Mr Navalny is to be successful in his liberalization of Russia, what will matter more than Western perceptions is the recognition he gets in his own country. Search trends in Google, Russia’s second most popular search engine, seems to confirm that interest in Mr Putin is at its lowest in years, while Mr Navalny’s popularity is growing, especially after his recent poisoning and subsequent return to the country.

Over the past decade, in an effort to deny him credibility, Mr Putin has been careful not to call Mr Navalny by his name, and referred to him as a blogger or a gentleman instead. Now, in an equally self-preservatory manner, the Kremlin tries to play down the recent protests sparked by the opposition leader’s jailing in early January. But in reality, despite the official statements, Russian authorities took unprecedented steps to repress dissent on the streets.

Becoming a popular leader is never easy, let alone in a country whose people have been repeatedly misled by their political masters. Mr Putin’s success can be explained at least partly by the relative stability and strength his presidency provided to a country desperate for order after the chaos of the post-Soviet 1990s and the failure of the Yelchin government. His strong-handed tactics, such as ordering a siege of the school in Beslan or ruthless dealing with adversaries Litvinenko and Nemtsov, perhaps did not endear him to all Russian people. However, they do seem to have kept them interested in their president, as did later international escapades in the Ukraine and Syria. The price for these acts internationally was increasing isolation and economic sanctions.

What nation could get tired of a strong leader? A poor nation perhaps. That’s why the dire state of the Russian economy and widespread corruption are the core topics of Mr Navalny’s efforts to demask and ridicule Mr Putin’s government. Will rising poverty and shrinking household incomes, combined with Mr Navalny’s efforts, be the forces of gravity that finally thwart Mr Putin’s star? They very well might.

Human Stories The Unknown Face of Yemen: A Conversation with Mar…

World News Trans Lives in the Visegrad Four: An Overview
0