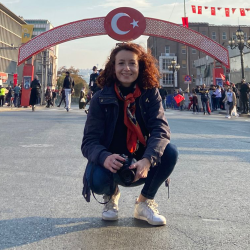 Margaux Seigneur
Director of the Department of Investigative Journalism at The New Global Order
Margaux obtained her bachelor’s degree in political sciences from the European School of Political and Social Sciences in Lille. She is now working as a journalist for different organisations such as UNICEF, Rights of Equality, Agenda Culturel etc. After living in Turkey and in the UK she is currently travelling in the Middle East to investigate women’s rights. Her area of expertise revolves around the place of women in politics, gender equality, refugees’ rights, freedom of expression as well as Turkish’s politics.

While the Turkish government is turning a deaf ear to the violence against women, many are opening their eyes to condemn it.

While the state is determined to oppress minorities, the resistance is getting organised and is not afraid. While Erdogan’s regime tries to silence the screams of women’s suffering, the voices of the opposition are rising up and shouting for their rights.

Among all these voices, one resonates even louder than the others. It is that of Cerme Topal.

A taste of struggle and a taste of equality is imprinted on her lip. On 22 November 2021 in Ankara, I encountered Cemre Topal. Lawyer, feminist, militant, her determination immediately struck me.

A Career Dedicated to the Defence of Women

Born in 1979 in Adana (Turkey) Cemre Topal became interested in feminism very quickly and decided to pursue a legal career in order to defend women with the weapon of the law. She began her studies at the Faculty of Law of Anadolu University in 1997. In 2001, officially a lawyer, she started her career in the capital Turkish capital, Ankara, until 2008. Once in the workforce, Cemre realised the heavy weight of her gender in her personal life. In response to this violent realisation, she started to get involved in feminist organisations. She then became an active member of the Socialist Feminist Collective.

She is now working as a freelance lawyer in Adana.

As a lawyer, Cemre Topal quickly realised the magnitude of sexism and the violation of women’s rights within the law and judicial procedures. She decided to fight it! To counter the ineffectiveness of the government’s protection mechanisms for women, Topal and three other female lawyers decided to create the Gender and Law Studies Association. The stakes are high: highlighting gender-based discrimination in local courts. In addition, the collective unwavering commitment is to defend women victims of sexual assault and domestic violence. For more than 10 years, the association has been working to ensure that gender-based and sexual violence is condemned in the courts of Turkey.

In 2016, the organisation became prominent through its relentless defence of Çilem Doğan, a woman who killed her abusive husband. During the trials that shook Turkish society, Topal became particularly renowned for her determination to save Çilem from life imprisonment.

While the language of the law defines the interactions that individuals have in society, the collective has focused on its sexist and discriminatory aspects. Indeed, in addition to dedicating their efforts to defend women victims of gender-based violence, the collective is now condemning the sexist language and behaviour present in trials for rape, femicide, self-defence, sexual assault, etc. “We were witnessing many cases of discriminatory language and behaviour in court. When a woman is raped, the judges find excuses to reduce the sentence for male perpetrators, while women who commit crimes in self-defence do not benefit from the same leniency” explains Cemre Topal.

In the very same way that Ruth Bader Ginsburg co-founded the ACLU Women’s Rights Project to identify legal cases of sexist discrimination in the USA, the collective has looked into the databases from the Adana Bar Association to identify the presence of sexist practices when meeting female defendants in the courthouses. The intention is both to condemn this implicit sexism and, above all, to make it public so that civil society can open its eyes to the reality of the legal world in Turkey.

The conclusion of this investigation was irrefutable. Indeed, the data showed many cases of gender-based discrimination. Frequently, the woman is not believed if the attacker appears to be a respectable person. Also, the data highlights a blame game against women as to why they were sexually assaulted or subjected to domestic violence. Thus, in addition to not being recognised, women’s sufferings are often mocked and perceived as illegitimate.

“The system often tries to shift the blame onto women.”

Identify Femicides: Getting the Numbers Right

Recently, Topal and her collective have been working to produce statistical data on femicide cases in Adana and in Turkey in general.

“Let’s start with the official number of women killed in this country. The one which the official statistics of the government have given is a false number. The government’s figures are systematically underestimated. The situation is played down. The number of women killed by their partners is exploding. We started to compile all the cases of women being murdered to try to have an exact number to work on and create a real database of the femicide in Turkey”.

Turkey has the sad reputation of being an open-air graveyard for women. And rightly so! Although Turkey’s government does not keep official statistics on femicide, the WHO data has shown that 38% of women in Turkey are subject to violence from a partner in their lifetime, compared with about 25% in Europe.

Many activists that I have met denounced the AKP’s obstructionist policy on violence against women. For instance, not only are there no government statistics reflecting the exact number of femicides but also many murders of women are officially considered suicides. Therefore, the real number of femicides is misrepresented and minimised. It seems that the AKP disguises the cause of women’s deaths to absolve the responsibility that fell upon their shoulders.

As you read these words, at least 287 women have died as a result of male violence since the beginning of 2022 according to the website Anit Sayaç.

“Women are alone and are killed with absolute impunity! When I’ll go home tonight, I’ll be alone facing the risk of being raped in the street or even killed publicly! Because yes, this is what’s happening here in Turkey!”

Young kurdish student during a protest in Ankara

More than ever, Cemre Topal’s struggle is crucial to the survival of women in Turkey. In a country that ignores the suffering endured by half of the population, the Gender and Law Studies Association embodies an active resistance that reports on injustices and unpunished crimes. Given their relentlessness, the extraordinary violence suffered by women will not remain silent. Fighting, condemning and publicly denouncing; this is the struggle that Cemre Topal has decided to engage in with her colleagues. A war that must be pursued continuously in view of the exactions which persist against women in Turkey. “It is the resistance and the incredible solidarity of women that will conquer”, highlighted Topal.

Margaux obtained her bachelor’s degree in political sciences from the European School of Political and Social Sciences in Lille. She is now working as a journalist for different organisations such as UNICEF, Rights of Equality, Agenda Culturel etc. After living in Turkey and in the UK she is currently travelling in the Middle East to investigate women’s rights. Her area of expertise revolves around the place of women in politics, gender equality, refugees’ rights, freedom of expression as well as Turkish’s politics.
View all posts by Margaux Seigneur →

The Second Voice A Conversation with the Lawyer of Çilem Doğan: P…